The United Clergy of Orun uses indoctrination and abuse to keep women in their assigned positions in their society. The clerics are paired with paladins and expected to serve and support them in their combat roles without concern for their own safety. Clerics are also expected to marry and have a predetermined number of children with their assigned Paladins. The Unexpectables first encountered these clerics as part of two-person strike teams where they were each paired with a paladin and commanded by Athtar, Herald of the Sun, centered at a base in Canary Channel. Audrey was (unwillingly at first) separated from the invasion force and provided information allowing The Unexpectables to aid four of her comrades to escape as well.

After the defeat of Athtar and the entire United Clergy Base, all but Evelina opted to stay with the Blood of Gnash tribe for one reason or another. Edward Enrobso realized that having one group further along the channel with the orcs with Evelina in town would allow for them to communicate back and forth, getting advance warning if the United Clergy ever decides to attack by sea again.

In a letter to the party, it was revealed that Marie, Honorée, and Kendra had moved nearby to Balton Village.

The first of the deserter clerics. See Audrey's page for full information.

Evelina is the least traumatized of the clerics who were rescued from Athtar's camp. She appears a bit oblivious to things going on around her and displays a free-spirited and carefree attitude that allows her to live in the moment and stay oddly calm despite some potentially traumatic situations. She has also shown a playful streak such as when she caused Greckles's beak to glow as a joke.

She took a particular interest in the mask of Lys when it was confiscated from Panic. She kept it safe from being destroyed by Athtar and even wore it to sleep, but found that doing so made her feel very lonely. She gladly returned it once she became allied with the Unexpectables.

She was raised in the same temple as Honorée, Maria, and Hellina. Post-Victory, she became enamored with the Drums the Coastal Orcs used, and spent the entire night drumming like mad to the tribe's approval.

Due to having an uncle running a temple in Alivast and her...eccentric behavior, Evelina was the only Cleric of the five to leave along with the Unexpectables. She got to see a dragon out of the deal, so one could call this journey a shining success already. She has gotten a posting at her uncle Jim Irrons' temple in the Lower Clergy District. She hadn't heard from her uncle in a couple of years because her father was told he couldn't write to him anymore by authorities in Paraton.

Evelina is currently the owner of a two-dimensional cat created by Zenrio out of Marvelous Pigments.

Evelina was assigned to have one child due to being a "loose canon."

Honorée is a tall young woman with a long nose, black hair, and a rather stern and authoritative look to her, like a math teacher or lawyer. Other than Audrey, she is the most outspoken of the deserters and serves as their leader and spokesperson. Under Athtar, she was paired with the paladin Boris, who was also strong willed and exhibited leadership qualities.

Honorée has been one of the most outspoken against the United Clergy's teachings, though like all the escapees, she still struggles with overcoming some of the things drilled into her such as views on kobolds and tieflings. She shocked her sisters by openly stating that she had more faith in Solly than in The Speaker, the United Clergy's mysterious leader that all followers are conditioned to revere. She has also openly criticized the Clergy's plan to invade Alivast as a waste of resources that could be used to help the Crimson Isles or used to further trade.

She was raised in the same temple as Evelina, Maria, and Hellina.

Honorée is in love with Kendra. The two were forbidden to express their feelings previously and were expected to eventually marry their paladins. She briefly got to experience what had to be her worst nightmare in watching her beloved being burnt to the point of near-death and then stabbed. Thankfully, she was able to save her life with a 3rd level Cure Wounds.

During the assault on the United Clergy Base, Shugha gave her warpaint of black wings of charcoal, symbolizing freedom. Post-Victory, she and Kendra had a chance to be alone together and presumably "missed" the grouse. She chose to stay with the Blood of Gnash along with Kendra.

During the 5 months the Unexpectables were in the Realm of Discord, Honorée and Kendra were wed

Kendra has short, chopped blonde hair and is quite pretty. She is willing to share some rumours about the United Clergy leadership, though due to the clerics being intentionally shut off from information she doesn't know much. She is quite perceptive about relationships, and is able to intuit that Greckles feels he has a bond with Solly that is very strong but without being romantic.

She is in love with Honorée, and uses the opportunity of their newfound freedom to support her partner with simple physical contact that was previously forbidden to them. She has also displayed her newfound freedom by exercising her ability to use four-letter words and flip the bird at her enemies, even doubling up on it when someone really pisses her off.

After being saved from the brink of death by Honorée, she returned the favor by helping her evade Athtar's legendary attack.

During the assault on the United Clergy Base, Shugha gave her warpaint of black wings of charcoal, symbolizing freedom. Post-Victory, she and Honore had a chance to be alone together and presumably "missed" the grouse. She chose to stay with the Blood of Gnash along with Honorée.

During the 5 months the Unexpectables were in the Realm of Discord, Kendra and Honorée were wed

approximately 18, the youngest of the clerics

Maria is a small young woman with large, thick, round glasses, and is the youngest of the group rescued from Athtar's service. She is exceedingly nervous and skittish as the result of the abuse she suffered at the hands of her paladin, Westcott the Cruel. She is withdrawn, but shows signs of recovery with the increasing distance from her abusive situation. All the clerics believe that Westcott deserves only death without mercy for the abuse he inflicted.

One bright point in Maria's new freedom has been Zenrio. She is greatly amused by his clownish behavior and his optimistic attitude and he has made her laugh out loud more than once and she has expressed a concern that he shouldn't eat candy in bed when he mentioned that he would occasionally indulge.

At the post-victory feast, Maria got absolutely trashed on the well-gotten gains of alcohol, becoming extremely supportive...if a bit weepy. She opted to stay with the Blood of Gnash.

Zenrio gave the five clerics each a wild strawberry he found. He explained that since they had been "in-doctor-inated" that "an apple a day keeps the 'indoctrinated' away" and since apples weren't in season, he used strawberries. Maria greatly appreciated the goof and laughed a lot. After being gifted the Marvelous Pigments by Frivayne and creating Frivayne Jr., Zenrio made a cat for Evelina that she took with her into Alivast.

Evelina was attracted to the mask of Lys when it was seized with the rest of The Unexpectables' gear. She successfully begged Athtar to allow her to keep it. She later asked the captive Remy about the mask and told him about how she had a dream of a similar mask that was more birdlike. She also later noted that when she slept while wearing the mask, she felt very lonely.

Initially, Greckles let his anger at the United Clery dictate his opinion of their clerics, however as he was given the opportunity to cool down and reflect on his relationship with Solly, he came to realize his error. He was taught some basics of the faith by Audrey as part of their plan to evacuate her friends and quickly struck up a friendship with the turncoat clerics. As he spoke to them about Solly and his own life, he realized how much he lacked guidance and began to consider Orun as a method to find it. After the battle, Greckles prayed before the Sunblade and had a vision from Solar, which seemed to grant him a new perspective on his situation. When he parted with Honorée, Kenda, and Maria, he gave them a genuine thank-you for their friendship and guidance, and they responded with the hope that Solly would come to aid them.

During the celebration after chasing away the United Clergy, a thoroughly intoxicated Panic began to tell the story of how Hellina rejected Tiengo's advances in an explosive manner. Though he embellished some details, the story he told was mostly true. However, the Clerics who knew Hellina in the past believed Panic's story to be an outright fabrication as the Hellina they knew wouldn't have gotten mad or screamed at someone in the way Panic described. 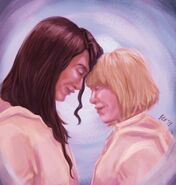 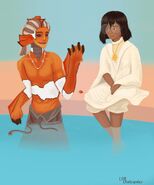 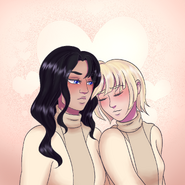 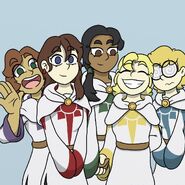 Add a photo to this gallery
Retrieved from "https://theunexpectables.fandom.com/wiki/Orun_Clerics?oldid=10057"
Community content is available under CC-BY-SA unless otherwise noted.